Everybody will be affected by bullying at some point in their lives, whether they are being bullied themselves or stand by and witness a situation. Whatever the case, the effects of bullying can stain a person and last forever, which is why it is so important to support and encourage others to use their power for good. 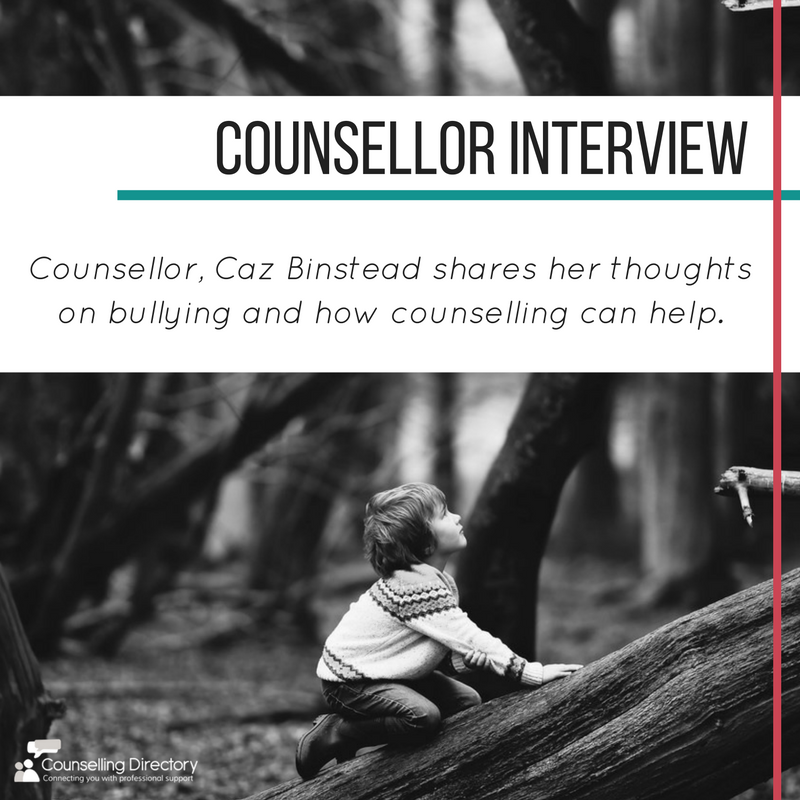 We ask counsellor and Counselling Directory member, Caz Binstead, her thoughts on bullying, who is most affected and in her experience, how counselling can help.

Bullying is repeated verbal, physical, social or psychological aggressive behaviour by a person or group directed towards a person or group. It is about control and power (real or perceived) and manipulation is an accompanying tool often used. It is intentional and intended to cause harm, distress or fear.

But bullying is also about a lack of understanding, a lack of tolerance to difference and a lack of acceptance – this may come from the bully’s own life experiences, or own lack of self-acceptance. A good example of this is seeing victims as ‘pathetic or weak’ and someone exerting power as ‘strong’ – perhaps evolving from either a particular cultural viewpoint or influence from one’s own family system. Also potentially indicating the bully’s own reluctance to accept their own vulnerabilities.

Sometimes people assume that those who are bullied lack confidence or character, but often, the opposite is true. People are often bullied because the aggressor may actually be jealous of a person’s individuality and ability to be at one with themselves. Bullying can also be centered around ‘bringing people down’.

This is why ‘power’ plays such an important role in bullying. It is a tool that can (and is) used, which can result in people from all walks of life being bullied. Where power systems are already in operation – such as in the workplace – it is all the more important to be vigilant to bullying and aware as a society how power can be used, and abused.

It is the responsibility of all of us in society to attend to this and to stand up and speak out for people when we witness such behaviour. Although this is not easy. For instance, in a workplace, we may be fearful that we may be the next target is we ‘get involved’. However, it is essential. Fear is again, a tactic used by bullies to prevent their behaviour becoming exposed. This is why educating the public and setting up support systems within our society is so important. Hence why I, as a counsellor am supporting Counselling Directory and their anti-bullying initiative.

Bullying can have a significant impact on a person’s self-esteem and manipulation involved in bullying can make victims feel like it was their fault. Counselling can h

elp people recover from the impact of bullying, as well as empowering them and enabling them to understand about bullying behaviour in a confidential, safe space. Always remember, everyone has the right to be an individual and to be respected. Let’s all stand up to bullying behaviour.