Lancet Public Health journal has concluded that of 57,000 cases of early-onset dementia, 38 per cent were ‘directly related to alcohol’ and that 18 per cent had previous alcohol use disorders. 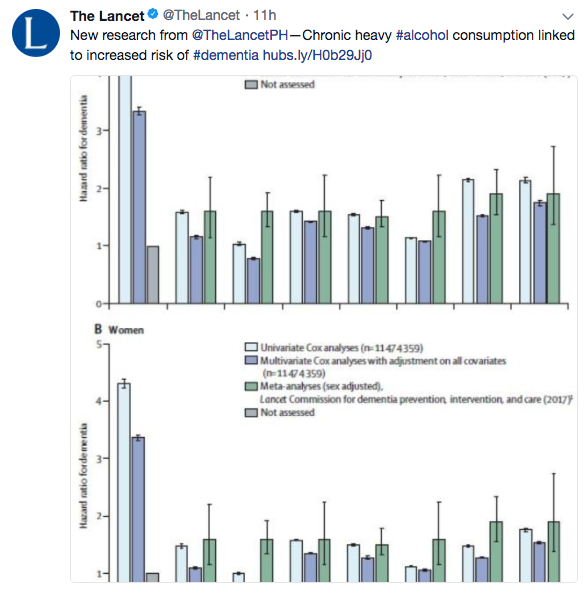 It added that patients with alcohol use disorders had a three times greater risk of developing all types of dementia.

The study was carried out using the French National Hospital Discharge database, which looked at more than a million people who received a dementia diagnosis between 2008 and 2013.

She said: “As this study only looked at the people who had been admitted to hospital due to chronic heavy drinking, it doesn’t reveal the full extent of the link between alcohol use and dementia risk.”

“Previous research has indicated that even moderate drinking may have a negative impact on brain health and people shouldn’t be under the impression that only drinking to the point of hospitalisation carries a risk.”

He said: “We have long known that alcohol is directly neurotoxic, thiamine deficiency in alcoholics devastates memory, alcohol-related conditions such as cirrhosis and epilepsy can damage the brain and that vascular brain damage is accelerated by alcohol.”

“Surprisingly, we’ve not traditionally considered alcohol and its misuse as an important risk factor for dementia and we were clearly wrong not to have done so.”

Lead author, Dr Michaël Schwarzinger of the Translational Health Economics Network in France, warned that the research showed damage done to the brain by alcohol is never repaired.

“It is very striking that for people who were heavy drinkers and had at least a period of abstinence, the level of risk of dementia is about the same,” he told the Guardian.