Mental Health Awareness Week - The regret of not investing in relationships 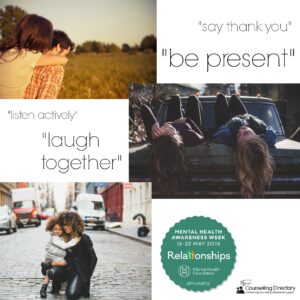 The report, which was released in conjunction with Mental Health Awareness Week, also discovered that men are more likely to feel regret compared with women.

Although building strong relationships can have a positive effect on our mental health and well-being, many of us are falling short when making connections.

50% of men surveyed said that they expressed remorse about missing out on relationships, compared with 42% of women.

The Mental Health Foundation are championing the idea of asking friends and family members how they are really feeling, so that people who are affected by mental health problems know they have someone they can talk to.

The report highlighted that 38% of respondents chose maintaining healthy relationships as ‘most important’ to their well-being. Whereas eating healthily only figured in 16% of votes, exercising with 10% and then avoiding negative habits with 8%.

Even with the majority of us recognising the importance of relationships, we are over three times more likely to make a change to our physical health in comparison to making a positive change with our relationships with family and friends.

The charity’s reason for this survey was the result of a review of global evidence pointing to strong relationships leading to us living happier, longer lives with less mental health issues.

The chief executive of the Mental Health Foundation, Jenny Edwards, said: “It’s time to recognise the global body of evidence which tells us that people who are more socially connected to family, friends or their community are happier, physically healthier and live longer with fewer mental health problems.

“It’s striking that the influence of social relationships on the risk of death is comparable with well-established risk factors. We need to give ourselves permission to spend more of our time in the friendships and relationships that are core to our well-being.”

If you would like to improve certain relationships in your life, a counsellor may be able to help. To find out more, take a look at our relationship issues fact-sheet.

Find a Counsellor or Therapist dealing with Relationship problems

Other articles by Ross

Finding your voice and finding yourself
By Sarah Freed, Specialist in Relationships, Anxiety, Depression and Loss
In my experience as a therapist, I would say that the number one reason for people...
Relationship problems Depression Low self-esteem

Overcoming self-hatred
By Kate Megase MBACP, Registered, Accredited Psychotherapist & Clinical Supervisor
Have you ever felt unloved as a result of attracting the wrong people? This could be in...

Emma: I am not a victim. I am a survivor.
In 1981, I was sexually abused by the restaurant owner who had befriended my family on...
Depression Relationship problems Low self-confidence Pregnancy and birth

Emily: The light-bulb moment that changed my life
People talk about having a 'light-bulb moment'. A moment when something switches on in...
Anxiety Depression Relationship problems Low self-confidence Low self-esteem Alcoholism

Louise Thompson: Anxiety, depression and codependency
Louise Thompson, known for the glamour and glitz of Made in Chelsea, is more than meets...
Get involved Connect with us, we're social.
Facebook
Twitter
YouTube
Before using our site, please take a moment to review our Privacy Notice and Cookies policy. By continuing to use this site we'll assume you agree to both.
Ok