Sow: Creating art from my own experiences of mental ill health

Hi there everyone. I'm Sow Ay, an anxious twenty-something living in Clermont-Ferrand, in the beautiful centre of France. I'm in love with music and try my best to make a living out of my passion as a freelance illustrator. I make designs for bands, t-shirts, exhibitions and I play music and draw on my blog in my free time.

This is my story.

I've been living with anxiety and mental illness for as long as I can remember. My self-esteem is super low. I often bite my fingers until they bleed, love music way more than I love myself and I hide behind the characters I create. 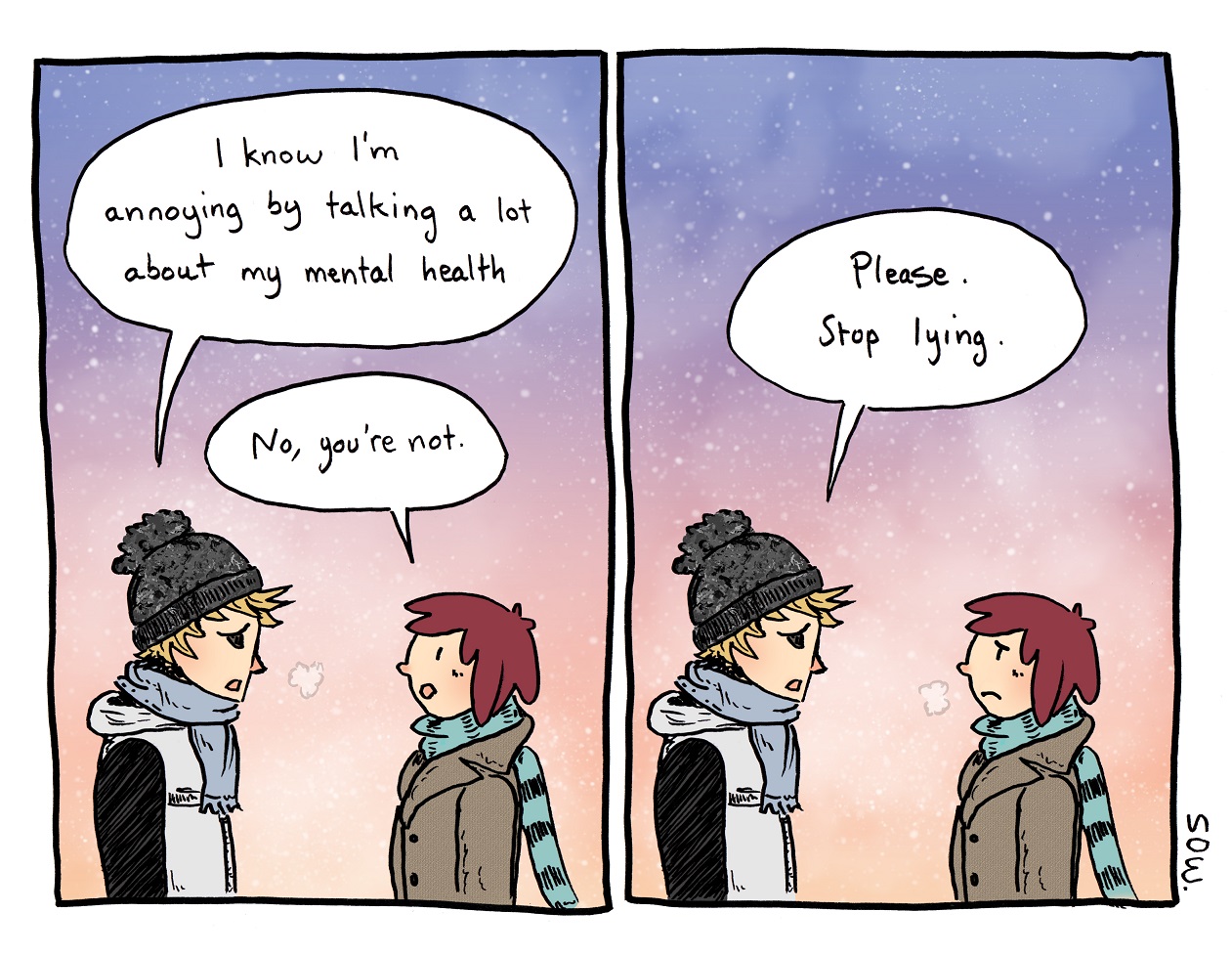 At 18, I was refused in art schools. One school even told me to give up drawing. I thought I wasn’t good enough for school. Not enough for anything. I was only 18 and already felt like I had failed my life. I'd always been living with anxiety but I think that's when the depression joined the party.

At that time, being mentally ill was a joke to me. It was for weak people. It was in their heads. I couldn't understand how someone could think about ending their life.

Over the years, I had some little jobs. Then I got one in a newspaper as a graphic designer. I was proud to work in the very world that had refused me some years ago! But I was still messed up and was now struggling with insomnia too. I tried to go to work and overwork on personal projects to avoid the over-thinking thing. But it didn't work.

My feelings were so strong that I eventually ended up talking about it with my doctor. In my head, I was thinking “I'm so weak, I hate myself”. 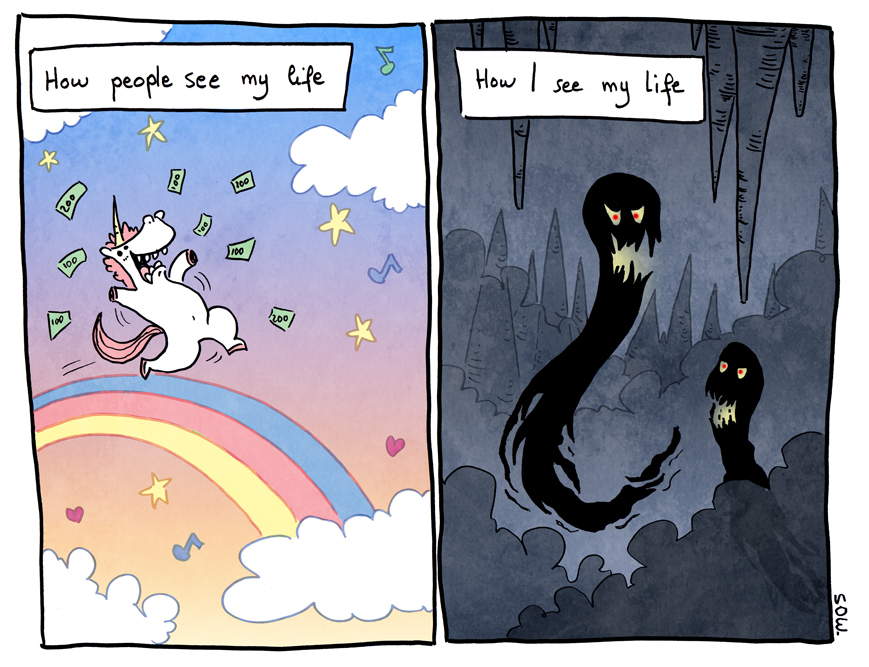 I was given sleeping pills but they didn't work and I just kept working the best I could to make a living off of my art. I'm still doing my best today.

But it wasn't long until I burnt out. I knew I couldn't go on, but I still worked and worked and worked because I was scared to fail. I had a full-time job, I was making a comic book, handling my shop and website, playing in a band, drawing for the internet and my friends.

They were all things I enjoyed. But, maybe altogether it was a bit too much. Or, way too much.

One day I half collapsed during a concert. It was a huge panic attack. It kept me in bed crying for days. I kept crying in bed and ended up wondering what was the point of living. It was worse than anything I've experienced before. I suddenly understood how it felt to want to disappear.

I told my mum I had a depression. I told my friends because I couldn't stop making stories in my head about how they would react. Then I went back to my doctor. I was given more meds but, unfortunately, they didn't work. 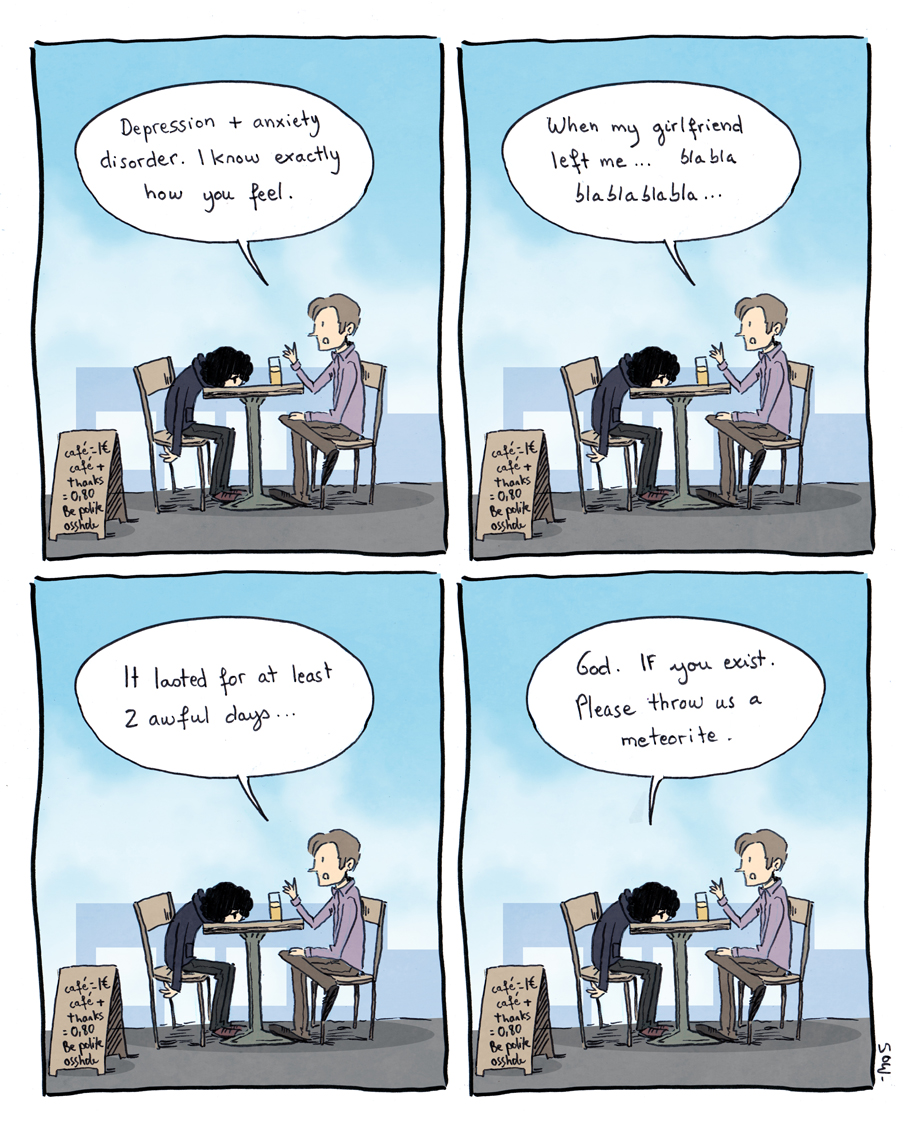 I went back to work for a summer that was just: bed, work, bed, work. I don't know how I kept functioning at work during that summer but I did, and my coworkers didn't notice anything was wrong. After the summer, my job came to an end. My mental health continued to deteriorate and, in December, I had my biggest panic attack. It had got even worse. By this point, my doctor proposed I take a few months of leave from work and I went to see a psychiatrist.

This was a little over a year ago. During that time I kept drawing my thoughts and sharing them online. This apparently helped many people and I ended up on websites like The Huffington Post and 9gag.

I still have bad days, even now. Yesterday, I couldn’t find the strength to leave my bed. I still have really low self-esteem. I still bite my nails until they bleed. I'm scared to relapse. I'm scared of so many things. But, I'm not alone now. I have my counsellor, my friends, my family and the internet. 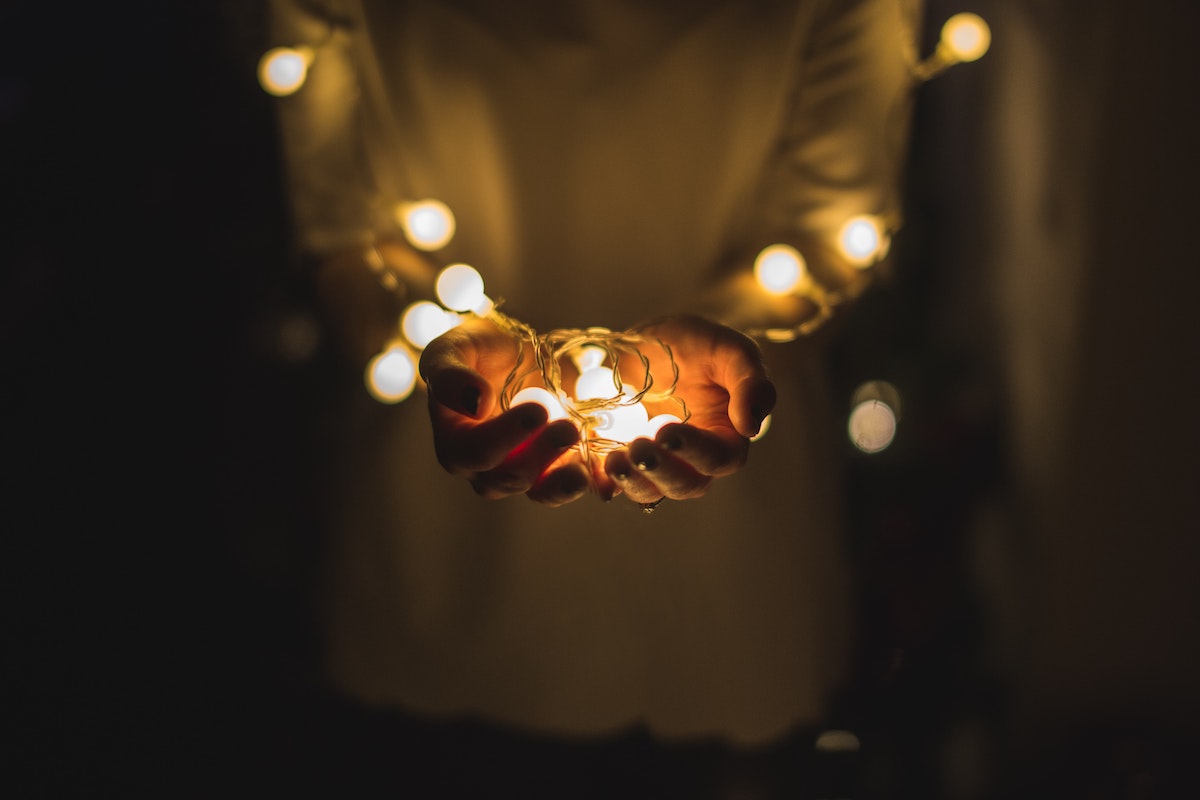 Coronavirus and counselling – a reflection
By Geoff Boutle MBACP (Snr Accred)
We currently live in strange times. There is apprehension but also stoic resignation....
Anxiety Stress 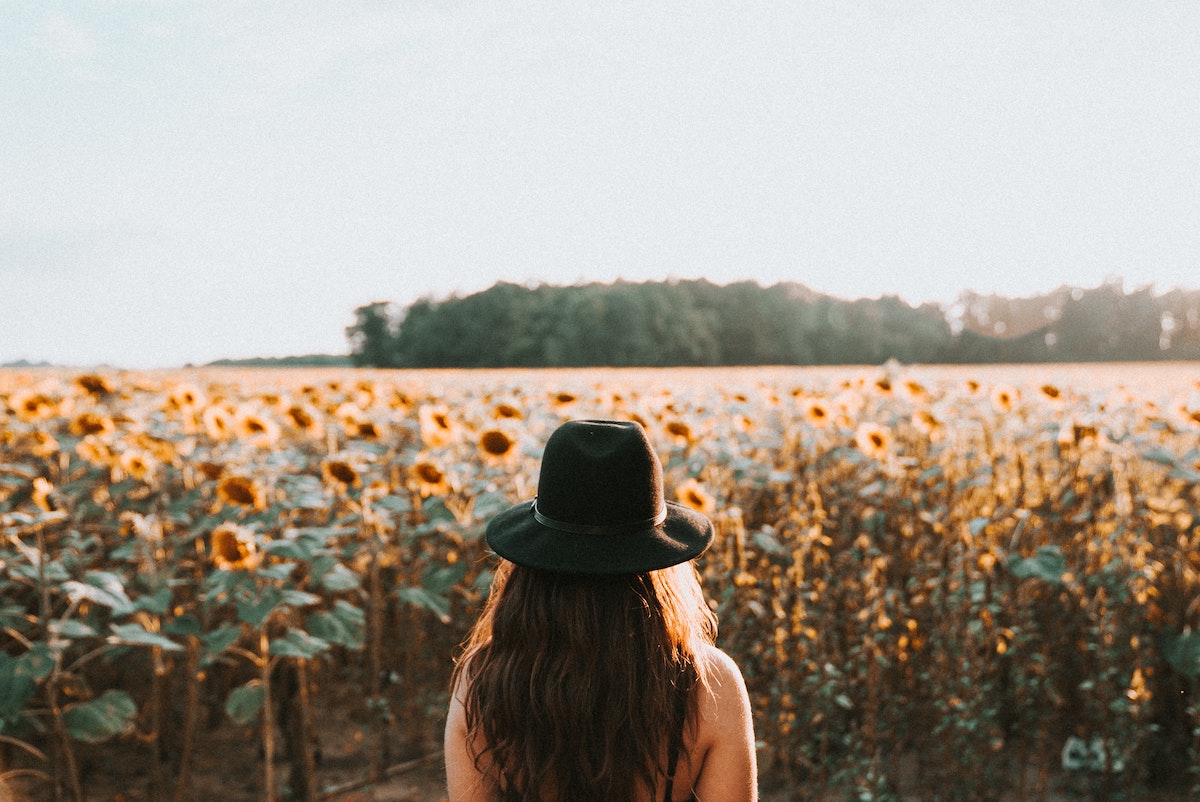 Trapped inside my head
By Greg Savva - Counselling Twickenham, Whitton - Masters Degree
Right now, the world really is in a state of alarm. It’s not all in your head, but...
Anxiety Stress 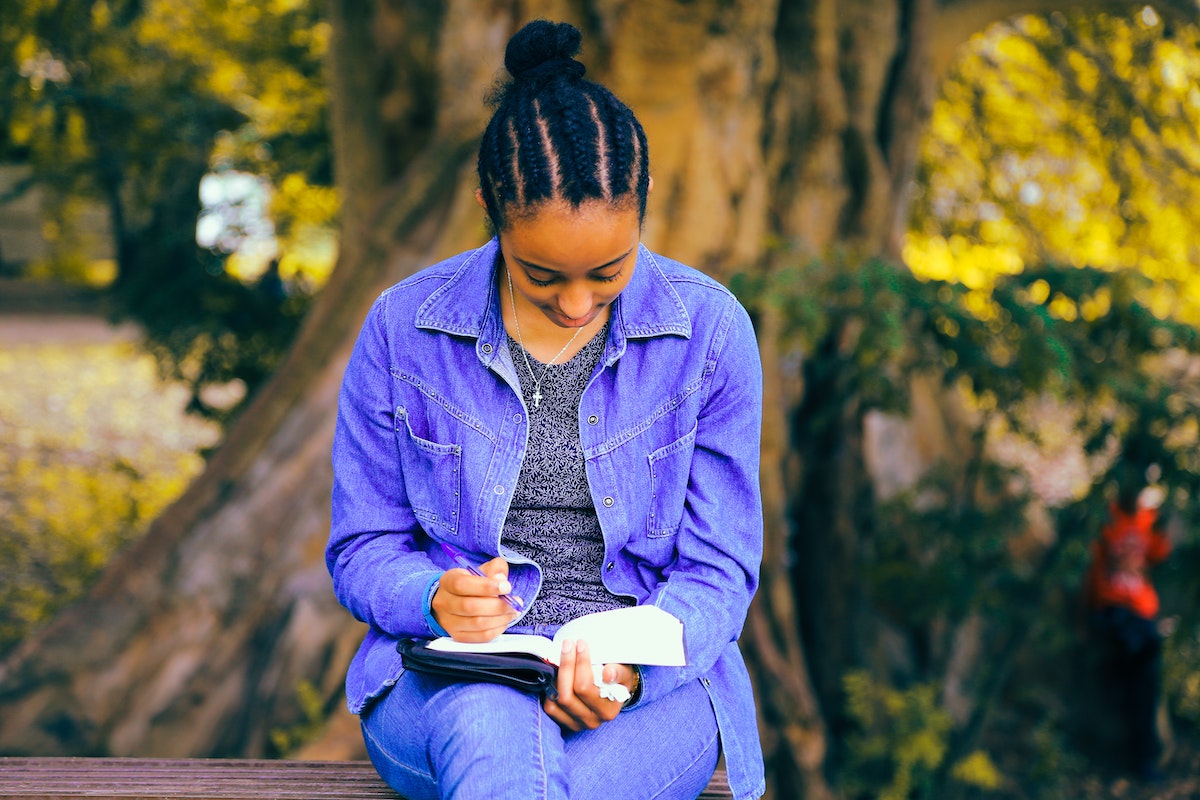 Mental well-being during coronavirus
By Jade Finlay
I was watching a video by Deepak Chopra (my go-to for meditations) and in this particular...
Get involved Connect with us, we're social.
Facebook
Twitter
YouTube
Before using our site, please take a moment to review our Privacy Notice and Cookies policy. By continuing to use this site we'll assume you agree to both.
Ok