Matt Johnson: I hid my depression for years

Matt Johnson, TV presenter and ambassador for mental health charity, Mind, has embarked on a journey to raise awareness of mental health, particularly in men. Following the release of his documentary Iselder a fi (Depression and Me), the Counselling Directory and happiful team caught up with Matt, to learn more about his journey, his work and his advice for those going through a difficult time.

Matt had been hiding his depression. for many years, not knowing when or how, it might have started. All he knew was that he was becoming angrier, sadder and starting to make the wrong choices. Matt says there wasn’t a specific event as such, but lots of little things that may have weighed him down.

In his twenties, there was a bump in the road. While out drinking, Matt fell and shattered his cheekbone.

“Suddenly, I was not invincible,” he says. “I felt vulnerable for the first time in my life.”

His girlfriend at the time didn’t know what he was feeling. He wanted to sleep during the day, and not much else.

“I didn’t have much purpose.”

The relationship broke down. Previously, his depression would only make itself known when he was alone - now it was creeping into his mind during social occasions. In a desperate attempt to cope, he started drinking - with friends and on his own - but the feelings weren’t going away or coping with themselves, so he drank more. Soon enough he was out of control.

Matt started to have suicidal thoughts. He was suffering from insomnia, and these dark thoughts would enter his mind in the early hours. In December 2009, Matt flew to the family home in Spain to clear his head. He planned to eat well, get plenty of fresh air and sober up but when he landed, it was raining. Matt got drunk in a bar and the next day, he didn’t want to do any of the things he’d planned. He drank. His plan hadn’t worked and he got very angry.

Eventually it came to the point where he was so deep in this anger and pain, that he went out on the balcony and came very close to ending it all. So close that he had one leg over the edge, when he was hit by a rush of emotion. Deliberation and exuberance took control and when reality finally hit, he stepped back from the edge and broke down.

“Previously I’d been numb. Now I felt real things. It was very poignant for me. And it was the start of a gradual process.”

The process of recovery took Matt nearly three years. He had to embark on a personal journey. It wasn’t easy - he had money issues and a break-up to cope with - but self-care was important. He exercised and he went outside and his self-confidence slowly started to return. He meditated and explored holistic therapies. He socialised during the daytime. But even after all this, he still hadn’t spoken to anyone about what he had gone through, or his depression.

As a Mind ambassador, he signed up for the London Marathon and naturally, the press started to ask questions. Matt knew he had to make a decision.

”You have to say the truth. Mind taught me to share, talk and discuss, so I said it.”

In the UK, suicide is now the biggest killer of men under 45 and tragically, due to the stigma of mental illness, these men are dying in silence. Matt made the decision to talk about his depression and his journey. With the help of Mind, he learnt that talking is nothing to be ashamed of. Matt wants to help others understand this. His mission is to get men talking about mental health.

Matt’s thoughts on… Helping others and self-care

“Helping other people has to come from a positive and true place, so I needed first to go on my personal journey. Having that explosion of understanding, of self-worth, of having the tools to go and make something important, it was part of my process. Self-discovery is a huge thing. It’s not a fancy thing to be kind to yourself. It’s absolutely a modern necessity.” 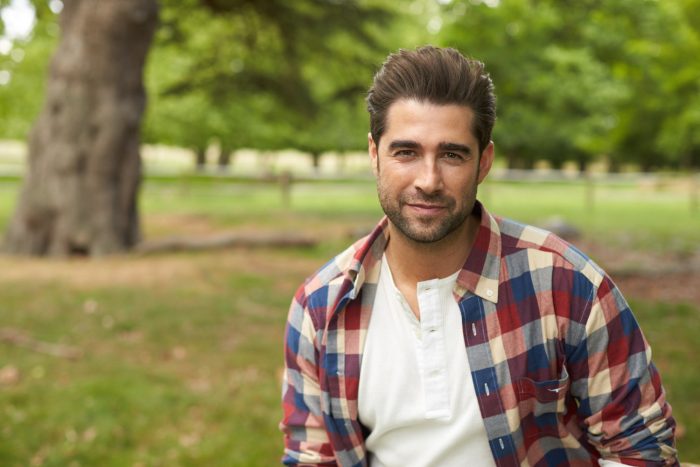 Being kinder to yourself

“That’s a big thing I’ve learned. Why are people so embarrassed to say they are happy on the inside? I think it’s because these massive corporations don’t want us to be happy, and don’t want us to not need anything. The truth is, life is very simple. Keep it simple.”

His journey to self-discovery

“I soon found that talking about depression brought many things back, so first I had to do my own personal journey. I went to Thailand. I did all the mediation, the sanctuaries. I went out with a girl who was so incredibly in touch with her spirit and mind. She introduced me to yoga. I researched many cultures. I’ve been to see palm readers. I did everything. And I took what I needed from it. I never thought, “Yes, Reiki will solve me!” But I did take the good things from different disciplines. I was present in the moment. I didn’t overthink the procedure. I opened myself up to things. If it works, fine. If it doesn’t work, you have tried it and now can move on.”

“Do we have the tools to deal with it? We take in so much information even before we have taken our first cup of tea. Our minds are bombarded with stuff. We’re constantly told we’re not good enough. People are being forgotten about. The powers that be want to dumb down citizens so they can be manipulated, and that I think they are partly to blame for the pickle we are in with mental health. They want stupid people to manipulate into voting and going on holiday and spending money on objects. These are nonsensical aspirations. We need to genuinely look after each other. People are making money from people being sad. Education is the key. Some schools in Europe have meditation instead of detention. We live in great times, but in a world where we are not taking responsibility for our own actions.”

Now in a good place, Matt’s career has taken a new direction - not only into documentary-making, but also into acting. Matt can next be seen in the upcoming Welsh feature film, The Point; a dark comedy written and directed by Jasper Warry, the film is set to tackle mental health issues.

Matt Johnson: Iselder a fi (Depression and Me) will also be available in English later this year.