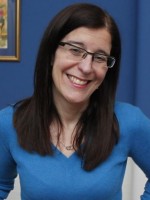 My journey began towards the end of last year, when I read an article in the British Medical Journal called Rape, A long lasting Weapon by Sophie Arie. * It focused on the plight of some 20, 000 women who were raped during the war in what is now Bosnia & Herzegovina.  Many of these women had also lost their husbands, sons, fathers and brothers during the Ethnic Cleansing.  I was very moved by this article and began to think about how one might be able to help these people.

I put together a simple proposal which involved training mental health workers in basic counselling skills, using the person centred model and providing supervision and support on Skype.  I suggested links with universities, women’s groups and medical centres and also proposed that a number of scholarships be established in order to offer further training in Scotland for a few individuals.

I contacted the journalist who gave me some of her contacts and started to contact people in Bosnia by email. I also began to research the country and its complex culture.  One contact led to another and it soon became clear that I would need to actually go there in order to establish whether my idea was viable and whether the people would even be interested in such a proposal.  PCT Scotland very kindly gave me a small contribution towards my travel costs and I made arrangements to go to Bosnia.

Fast forward to April of this year and I arrive in Sarajevo, the capital of Bosnia, to pitch my idea.  I managed to arrange to see a variety of people, including two psychologists, a psychiatrist/university professor as well as a number of lay people who work in the media, publishing and the British Council, and a cultural organisation.  Everyone was warm, friendly and helpful, especially once they realised I didn’t have a political or personal agenda.  I am Jewish and this turned out to be a huge advantage as it meant that I was completely neutral in their eyes.  During the four year siege of Sarajevo, the Jewish community fed, clothed and provided free medicine to everyone in the city, regardless of their ethnicity and therefore the Jews are regarded with great respect and admiration.

Sarajevo is a city of contradictions; beggars in the street but in the very same street you can pay for parking with your mobile phone!  Minarets and mosques alongside cathedrals and churches and one enormous synagogue.  Cemeteries everywhere, next to smart pavement cafes and elegant shops.  Every building bears the scars of shelling and gunfire, every pavement is cracked.

Bosnia has 50% unemployment, terrible poverty and there is no welfare state.  There is virtually no foreign investment, no tourism to speak of and no industry.  The whole country is struggling to cope and, everyone I spoke to had a heartbreaking story to tell, involving trauma and loss.  For example, I was told that 3000 children died during the siege of Sarajevo.  It was hard to take in the degree to which the country has been devastated, even fifteen years after the war.  I came to the conclusion that the whole country would benefit from counselling, not just the rape victims.  I also realised there is no culture of talking therapy at all, and yet there seemed to be a tremendous need.

As I write this article back at home in Glasgow, I am delighted to confirm that my trip was entirely successful - the first of the workshops will run in October of this year.  They will take place at Kosovo (pronounced “kosheva”) Hospital in Sarajevo, with 15 attendees.  These will be a mix of trainee and qualified psychologists and psychiatrists who are interested in a new way of working and who have the time (and good enough English) to participate.  The workshops will focus on experiential groupwork, which is a type of training that does not exist in Bosnia.

I offer a warm and relaxed approach to counselling and am happy to chat on the phone to potential clients - that way, you can get a sense of what it's like to work with me.A bit of background: I originally studied languages and then worked in International Marketing & Advertising. Since retraining as a counsellor in 1998, I have gathered over 20 years experience working with a large range of i… Read more