Men are much more reluctant than women to look for help for their problems. Studies have shown that today’s man is more likely to be suffering from anxiety, depression, alcohol or drug abuse yet the ‘stiff upper lip’ culture continues to apply.  Is it because men see counselling as a female activity, is it because most counsellors are women, is it perhaps because it is a sign of weakness to admit to a flaw or perhaps there is some other gender-specific reason. 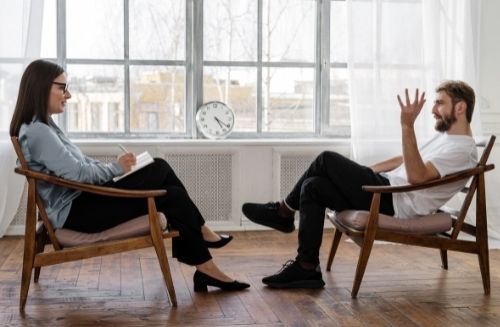 It would be wrong to say that men never seek help, but often they leave it till the last moment, till the situation is in crisis. They may end up with a broken marriage or a serious addiction problem or even homeless or attempting suicide. So what is it that makes men so reluctant to enter therapy and is there anything that can be done to make therapy more acceptable to the male psyche?

Certainly, the modern man has not escaped the expectations of society and many of the stereotypes of masculinity are reflected in this. Heroes are usually male strong and self-sufficient. They know how to deal with any problem and are able to rescue people from any difficult emotional or physical situation. It is often seen as a female role to offer comfort to someone with emotional trauma: A man crying or a hug).

Men and boys are predisposed to competition, look in any schoolyard to see the boys playing some sport where there is a winner (football, running etc.) and the girls playing cooperative games (skipping, talking etc.). While these are extreme stereotypes it is possible to see how one leads to hiding one's vulnerabilities and one to be able to look for support for one's vulnerabilities.

Spool forward to the adult, men often get their support and their emotional needs met from one or two sources (often a wife or a mother). They to some extent rely on those primarily for their emotional support. While they may have a great many friends, a large part of those relationships are about showing strength and an ability to cope or as a competitive meeting. If the primary relationship breaks down it is going to be hard for the man to deal emotionally with any crisis.

Often it is these crisis points that bring men to therapy: A relationship problem, a stress issue, a stress incident at work, etc. The first and most important thing is to recognise the huge step that the man might be taking in coming to therapy in admitting that there is a problem, given the social and past conditioning. Almost as important is to provide a safe and confidential environment (as seen by the client) so that any fears of exposing their problems to the world might be set aside. In providing these the therapist then invites the man to explore deeper feelings. Perhaps those feelings have been hidden or repressed for many years, for fear of a sign of weakness or judgement.

Through these processes men can find an inner strength that makes them more able to confront their fears, express deeper feelings and break the bonds of past conditioning even with other men. Ultimately the process has opened a door where he can be part of his own heroic life, being fully authentic and being able to say this is me regardless of what you might think.

Graeme is a counsellor and author living and working on the south side of Glasgow. In his practice he sees a number of clients with emotional, anxiety and self-esteem that have relevance to us all. His articles are based on that experience and are offered as an opportunity to identify with, or to challenge you to make changes in your life.