I’ve had eczema since I was a child. I don’t remember much about it then, which is probably a good thing, as I’ve been told the stories by my parents of being carried wherever we went because my legs were so bad they would split if I walked. When I grew slightly older I remember being wary of the sea, something I still hold to this day, due to the sting of the salty water on my cut legs. 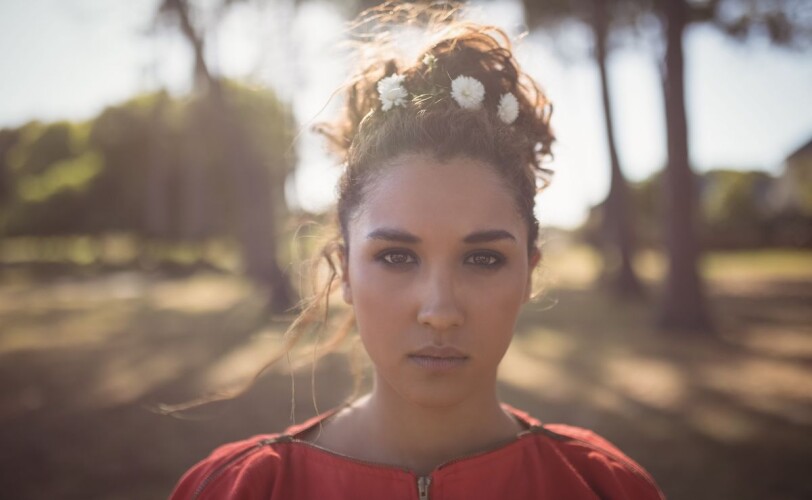 In my teen years, I felt it keenly. I hated my skin back then. It became an enemy, something I was always battling with and felt I always lost. One memory that stays with me is of having a patch that developed on my forehead due to the eczema. It stayed for what felt like years but may have only been months. I don’t remember anyone mentioning it but, to me, it was what defined me, it showed my skin condition to the world, showing my imperfections and my lack of prettiness which seemed so important as a 14 year old girl.

I cried so much as a teenager for hating my skin, it would bring me really low because to me, at that time, it felt like the worst thing that could have happened to me. And no one around me truly understood, no one I knew had eczema like I did. I felt alone.

Writing that makes me emotional. No one should have to feel alone. There is not much known about the relationship between eczema and mental health but the National Eczema Association says that they "have higher rates of depression, anxiety and conduct disorders."

If that wasn’t enough, having eczema can bring all kinds of allergies along with it. Hayfever has been associated with it and I have been dealing with that for several years now when spring has sprung. One year my eyes came up so badly that I looked like I had two black eyes. Not the best look!

The most common things I have heard about having eczema are: one, don’t scratch and two, cut your nails. Here is why this is not helpful.

The itching is unbearable. I have always scratched, I can’t not do it, it isn’t a choice I can make because to not scratch feels like torture. I used to wear cotton gloves to bed to stop me from scratching but I would go through the ends of the gloves with my fingers due to the friction. My poor mum would stitch them up every day for me to wear again the following evening. I don’t know how much sleep I get in a night, I know when I’ve had a bad night as I can remember waking up multiple times. As you can imagine this can make you feel tired and exhausted the following day.

Cutting your nails may seem a sensible thing to do but, in my experience, it would come off worse because not being able to use the nails to scratch means you drag them which rather than just scratching the top of your skin, will tear your skin leaving gouges rather than just some cuts.

I’ve had so much advice about my skin over the years and I know it has all been well-meant but I’ve tried so much to help with my eczema from changes to food, taking vitamins and tablets and even UV treatment and allergy tests at the hospital. And even though I now know what my allergies are and what to avoid, nothing has really helped.

It was once thought that my eczema ran in seven-year cycles but I now have proof that it doesn’t. I get periods of it being better and easier to manage but I also get flare-ups, usually in a different place on my body which I then treat with specialist creams from the Doctors.

Even now, I hope for it to not affect my face but it does happen. I get really dry areas alongside spots which I had hoped to leave behind in my teens. I rarely wear make-up because I hate the way it feels on my skin and if I have particularly dry skin it can just make me look worse.

It wasn’t until I had my own counselling as an adult that I began to explore the effect having eczema had had on me. Being able to talk to someone who listened and tried to understand by putting themselves in my shoes made me feel I could talk about how I felt on a much deeper level than I had ever done before. This opened my eyes to see the truth of my feelings that I hadn’t allowed to come forward before and made me recognise that what I had gone through was valid and I was seen and heard.

Having eczema doesn’t affect me as much now though as I have become more accepting of it as I have grown older. From sharing with others and letting them know what’s going on for me when I have had a bad flare up helps me to voice what it feels like and it’s good to feel heard. I think sometimes people see it as a skin condition which isn’t very significant, but for that person going through it, it is the world they are living on a daily basis and it is a big part of their lives.

I have eczema and will probably always have eczema, and it has defined me, it has made me stronger, more accepting of who I am and more understanding of people in pain, whatever that pain may be. If you have a skin condition that is getting you down or you want to talk to someone about something you are going through, reach out to a counsellor. I may be biased, but I think counsellors can help us to make sense of things when everything seems too much.

Chloe has a Diploma in Counselling & Psychotherapy and is a member of the British Association for Counselling and Psychotherapy. She offers counselling sessions online and by phone to adults 18+ and is based in Southampton.