Whilst the playground remains the most common stomping ground for bullies, a survey conducted by Counselling Directory reveals that bullying at work and cyber bullying are on the increase. With the same study also revealing that less than half of victims report any incidents and seek help, the online support network are encouraging individuals to let someone else know what’s going on and consider talk therapy to help them move forward. 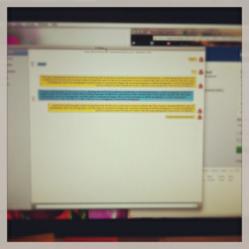 Bullying is unfortunately a common aspect of life. In fact, a staggering 93% of the individuals surveyed admitted to having been the victim of bullying at some stage [1].

Bullying can be an extremely traumatic experience, and whilst many individuals will manage to navigate their way through school, work and other aspects of life relatively unscathed by the behaviour of others – some will not be so lucky.

From Bluto and Popeye through to Dennis and Walter the Softy – if we were to take too much heed of the portrayal of bullies in comics and cartoons, they would stand out like a sore thumb among the crowd. If only it were that easy. Bullies don’t conform to a stereotype. They aren’t always big and stupid like Bluto or small and menacing like Dennis.

From the girl across the street with pigtails and rosy cheeks through to the suit donning boss or a faceless individual in an Internet chat room – bullies take on many forms and can be found anywhere.

According to a Counselling Directory survey carried out between February and April 2013, of the individuals who admitted to having been a victim of bullying, 34% were bullied at school, 27% were bullied in the workplace and 8% were bullied on either social networking websites, by email or in a forum/chat room.

Whilst bullying in schools remains the most prevalent form – bullying at work and cyber bullying have both experienced a huge surge in recent years – potentially as a result of workplace pressures and growing online communities.

The impact of bullying

Bullying doesn’t have to be physical to leave scars and make an impact. In fact, whilst 18% of victims who completed the Counselling Directory survey experienced physical bullying (pushed, pulled about, physically hurt or having possessions taken), the overwhelming majority (82%) said they were verbally bullied.

Whatever form bullying takes, if left unreported it can make life miserable, potentially leading to:

As management styles morph and a high percentage of the population live in fear of losing their jobs – it is becoming harder and harder to draw the line between what is a ‘crotchety’ but acceptable leadership approach, what is intimidation and what could ultimately be classed as ‘bullying’.

Whilst in an ideal world grown-ups would ‘know better’ and the workplace would be reserved for professional exchanges only – unfortunately some employees can end up feeling that the space between their desk and the water cooler is a no-mans-land they would rather avoid. Individuals who think they may be being targeted at work should look out for the following:

How to tackle bullying at work

Bullying at work is unacceptable and under the Equality Act 2010 is against the law [2]. For individuals who do believe they are being victimised in the workplace, talking to their manager, HR department or trade union representative should be the first port of call, and of course opening up to a friend or family member could also be a huge release.

Whilst the Internet has considerable benefits, it is not without its pitfalls. Easy 24-hour access to the World Wide Web now means that individuals can be targeted by bullying from almost anywhere in the world from social networking platforms such as Facebook and Twitter through to Internet chat rooms and forums.

Cyber bullying is a relatively new form of bullying and only emerged after the advent of the Internet. Today it is a growing area of bullying – potentially because it allows the bullies to remain at a safe distance – behind their computer screen and a false identity.

Cyber bullying can take on a number of different forms, including:

How to tackle cyber bullying

Individuals targeted by cyber bullying can be left feeling scared, upset and embarrassed and fear it may never end. No one has the right to make another individual feel this way and a hugely important piece of advice for all victims of bullying is don’t be ashamed to let people know what’s going on so help can be sought.

In the case of cyber bullying, seeking help can be more problematic because the bully is often anonymous. In cases such as these the following steps can be taken:

How can counselling help with bullying?

Whilst there are a number of practical strategies that can be employed to help beat bullying, in cases where physical and emotional well-being have already begun to suffer significantly, further help such as counselling may be beneficial.

Counsellors who specialise in bullying have undergone training that will allow them to help clients break out of the bully-victim relationship cycle they are currently trapped in. They do this by using a combination of assertiveness techniques, transactional analysis and cognitive behavioural therapy (CBT). In addition, counselling can also help to address side effects of bullying including anxiety, depression, low self-confidence and low self-esteem.

Victims should never have to deal with bullying alone. Just having someone to talk things through with as well as listen, can be really important and can help to make victims feel more confident about dealing with the situation.

For individuals who are or have been the victim of bullying, visit Counselling Directory today. It could be the first step towards a happier and more confident future.

[1] Counselling Directory figures based on an online survey carried out by website visitors during February and April 2013.
[2] Gov.uk, Workplace bullying and harassment. Available https://www.gov.uk/workplace-bullying-and-harassment.