Most people have heard of the condition called OCD. Actually it is currently ‘in vogue’ to call your neat perfectionist behaviour “my OCD” which is somewhat very irritating and discounting to genuine affected sufferers, because the reality is far more disturbing and disabling.

The way to work out if you are experiencing OCD or OCPD is to ask yourself, am I doing my compulsive behaviour out of fear that something terrible may happen if I don’t implement the compulsion, or am I conducting my behaviour as result of feeling in control and this suits my personality which results in getting satisfaction from it. People with OCD absolutely hate their rituals and compulsions and feel powerless and controlled by them. So the bottom line question is: Are your compulsions a 'have to' or a 'preference'? If it’s a preference and gives you fulfilment then it is OCPD.

So what is the truth regarding OCD?

"OCD is a genetically inherited neuro-psychiatric condition. It is caused by overactive brain circuits in the error detection part of the brain that sits right over the eye sockets". (Jeffrey M. Schwartz, M.D. is an American psychiatrist and researcher in the field of neuroplasticity and its application to obsessive-compulsive disorder.)

Although, anxiety often accompanies OCD, but it is a symptom of the condition not the cause.

The very nature of OCD is very distressing and exhausting and often sufferers experience depression.

Although anxiety and depression are symptoms of the condition, it can sometimes co-exist with other mental disorders such as clinical depression, generalised anxiety disorder, bipolar, eating disorders, schizophrenia and autistic spectrum disorders, Tourette’s syndrome and obsessive compulsive personality disorder.

OCD causes distressing and debilitating behaviours that can consume many hours of a day. It can quickly morph and change in terms of content and appearance. Stress, pressure, illness, trauma, tiredness, boredom are all triggers that can exasperate the condition. Please note these are triggers of the condition not causes.

The onslaught of OCD generally starts after a stressful life event. Other triggers are hormones, childbirth, illness, Streptococci throat infection and Lyme disease. It is important to realise these are not causes of OCD but are the sparks which switch on the biological genetics.

When treating OCD you and the therapist are treating the symptom not the cause. Although, cognitive  reframing around possible triggers may be part of the therapeutic treatment.

The very content of OCD is multifaceted and is unique to each individual person. There are various themes of OCD but the one common denominator is the distressing process of the condition. It’s the worry of the unknown if you don’t perform the ritual which keeps the sufferer in the constant loop of fear. This worry is often accompanied by intense anxiety, fear and dread. The compulsion is implemented to reduce, eliminate or neutralise the associated stress. Unfortunately the compulsions only provide short term relief and over time have become so intrinsic to the fear that it develops into an autopilot coping mechanism.

All of the above is very distressing and debilitating. But there is good news. OCD is a treatable and manageable condition and it is possible to gain full control over the disorder. The sooner you receive effective therapeutic support, the better. Like any behaviour the longer it goes on the harder it is to break. Cognitive behaviour therapy (CBT) along with exposure response prevention (ERP) is the type of therapy recommended by the NICE guidelines. There are many practitioners qualified in CBT and understand OCD. Don’t be ashamed by your illness and don’t keep it a secret. The sooner you reach out for help, the sooner you will be on the road to recovery. 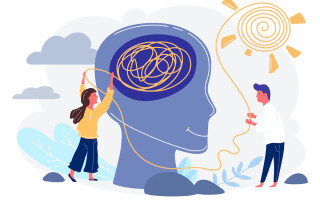