The World Health Organisation guidelines state an adult with a BMI below 18 is considered malnourished and 17 severely malnourished. The average catwalk model has a BMI of 16.

When Rosie Nelson, a size 8 model, walked into a London model agency she was told she needed to 'get her measurements down'. Four months later she went back, having lost nearly a stone, and was told that she needed to lose more weight and get 'down to the bone'.

At that point she started a petition calling for health checks for models that take part in London Fashion Week. Parliament has listened and MPs are to investigate whether very thin models should be banned from British catwalks.

But whether this will help to bring down the record numbers of women who are suffering from anxiety about their body image is another question. The language of weight, size and shape has become a major factor in how women evaluate themselves, and whilst very skinny models are almost certainly part of this problem it is much more complex than that.

Indeed, there is another technology that now influences our view of women and how they are valued, that is photoshopping. Women no longer compare themselves to their friends, family, or people they see in the street - or even to 'severely malnourished' models. They now compare themselves to photoshopped images of other women. Some estimates suggest that in Britain we see thousands of these digitally altered images each week.

I want to feel as good as she looks

Where does this leave us? Destined to be unhappy in our skin? Reaching for something unobtainable and chronically dissatisfied with ourselves or on a permanent diet and exercise regime?

The myth that youth, thinness and perfection are the way to achieve happiness seems to be pervasive. Somehow attractiveness and states of mind get confused. It is believed that if someone looks great then they must feel great. An individual's own unhappiness and sense of dissatisfaction can be blamed on the fact that she doesn't look her best or as good as the images that surround her. It therefore makes sense to put her time, effort and money into changing how she looks.

This can lead to a vicious cycle of hope, and either failed attempts at dieting or successful dieting and exercise, followed by eventual weight gain and disappointment. And it seems that some people can stay in this loop for many years; with how they look and what they weigh being as important as anything else in their lives.

In this frame of mind there is no space for looking ordinary, there is only the desire for and pursuit of an 'ideal' body and the hatred of their own 'fatness'.

My experience of working with women who struggle with these issues is that, at some point, it is possible to realise that the diet and exercise regime doesn't work for them - either because it doesn't provide them with the body they hoped for or, having finally got the long-desired svelte body, it doesn't actually give them the feeling that they thought they would get from looking like that.

This kind of realisation can be life changing. If someone reaches this point then other questions can be asked. They can start thinking about what their struggles with body image, weight and food have done to them. How have they been left feeling about themselves? What damage have they done to their bodies and to their relationships with others?

Another question that can be asked is what has this struggle done for them? This may seem a strange question at first, but as Julia Buckroyd suggests in her book "Understanding your Eating", for many people a preoccupation with food and their body is a way of expressing things that it has been difficult to put into words. These preoccupations can be ways of expressing, coping with or avoiding underlying issues such as intimacy, how they relate to others and how they deal with change.

Thin cat walk models and photoshopping definitely help sustain an environment where women are judged by how they look and where their body size and shape can become disproportionately important. Any steps towards changing that environment should be taken seriously.

Along side this is each individual's personal struggle with these issues. In my experience, for many people, a big part of the solution is first of all being able to recognise the preoccupation for what it is and then taking time to attend to some of the underlying difficulties, a process which opens the door to feeling good about oneself from the inside out.

Getting it wrong and being wrong – what is the difference?

You might think these are the same thing. I see them as very different but they are often conflated... 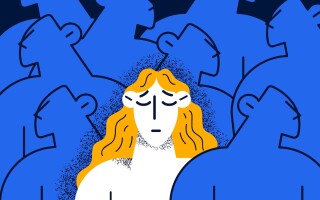