Magic in the mist

In December 2012, I decided that on this warm morning in Cancun, I would drive up to Mexico City. 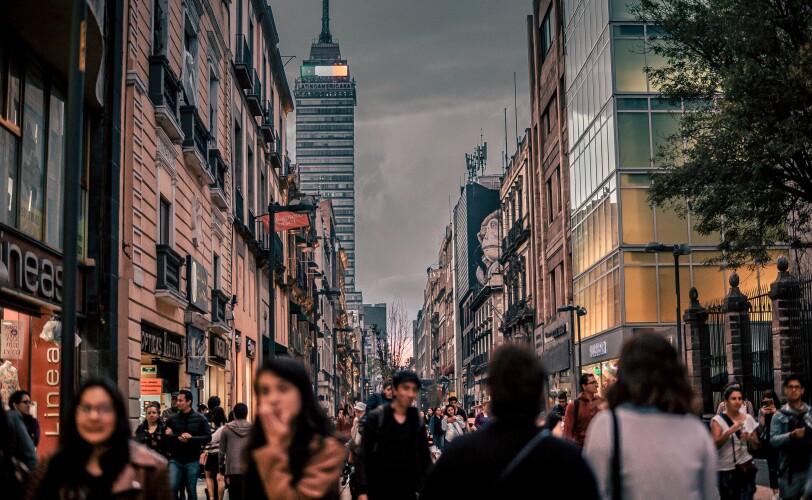 The night previous I had looked at flights, and they were all just a bit too expensive. In addition to cost, my fear of flying seemed to have overtaken my joy of travelling and arriving at places quickly. In retrospect, I think the lack of control I felt when I flew had been added to after the death of my husband. If I could rationally tell myself that it was safe to fly, much safer than driving, I would hear a very small whisper answering back, reminding me that the risk may be tiny but that I know awful things can happen. I know how lives can be changed by occurrences that have a very low chance of happening. They can still happen, whether there's a high risk or a low risk. Awful things can happen, and I wasn't ready to take a chance... not yet.

So I woke my children and we packed our bags. I spoke to a close neighbour and organised for her son to look after our dog. We passed by a friend’s house on the way out of town, who waved us off on our journey, and we left Cancun. We were going to drive for 24 hours, give or take, up into Mexico City. We wanted to arrive at the house of my daughters' grandparents on Christmas Eve. My husband passed away on the 20th December, two days after my daughter's 5th birthday, on our 10th Anniversary. Five days before Christmas. 2009. Life can be tricky.

And so also can it offer wonderful things. It has been my passion since I was young to travel. I love meeting new people. I love learning new languages and finding ways to communicate. I love that moment when I feel I have connected with someone. It’s the reason why I became a therapist. It feels like magic to connect beyond just the surface of the daily routine; it feels like an honour.

I wanted to make that journey to get to Los Abuelos in time for Christmas. I knew we would meet great people along the way, and I knew we would have a safe journey travelling from the South of Mexico up into Central Mexico. I also had a dear friend who happened to be a taxi driver, who I knew had made the very same journey several times before, and who would rescue us if we needed help. So although I am spontaneous, I do like to make sure my back is covered!

We drove eight hours that day, into Cuidad del Carmen, and stopped whilst it was still light to find a place to spend the night, to eat and to rest. Along the journey, we passed a lighthouse and we talked about why they are so appealing and so practical! My younger daughter was five and my elder daughter just turned eight. We almost ran out of gas after I misjudged the distance from Merida to the next gas station, and so we had stopped to ask two young men on horses how far it was to the next gas stop. They replied, "just along the road a bit". I prayed to my husband that we would get to it before the red light came on. As I saw the familiar sign around the corner, we all thanked Papi for coming with us and for keeping us safe. It was a good first day.

On the second day, we travelled early, around 8 am, maybe until just after 10 pm. It was a quicker journey than I had anticipated. Less than 24 hours.

That second day, we saw an array of amazing views. Before arriving at Pueblo, we drove down a twisty road that was fast-moving and long. It brought us towards Pueblo, as I recall, and the light started to fade as we came close to Popocatepetl, the live volcanic mountain that stands tall and proud, and which can be seen, when pollution allows, from Mexico City. As the daylight faded and we slowed down in traffic, we watched Popocatapetl closely, seeing the smoke stream from it up into the sky, knowing it was rumbling away in its depths. I felt such energy from knowing we would have missed such a sight had we flown. My girls giggled in the back and made lots of jokes about 'popo' ('poo' in Spanish and their nickname for Popocatepetl).

We drove into Mexico City in the dark - it was late Christmas Eve - and we entered from the east of the city. Mexico City was my home for a time and I love it. I know many of its streets well and learnt to drive there, but I wasn’t familiar with the east part of the city.

I stayed calm. We asked for directions a couple of times. We arrived. Safe, tired. We arrived on Christmas Eve. We were welcomed into Los Abuelos' house - Christmas Eve, in time to celebrate Christmas.

It needs to be added somewhere that on the journey home we left Mexico City around 3 am, and as dawn broke we stopped to look at the mist as it rose over fields. It was a magical moment, and I picture it clearly as if in a photograph.

It seems to me that often these magical moments come when least expected, and it also seems that they often come when we connect. It perhaps sounds corny to write that, in my work as a therapist, I hope to find that magic with the clients I work with.

The connections we make are what allow us to share stories, and in the telling of stories, we find common links, bonds, and understanding.

A client recently was surprised by my belief that therapy is often a two-way relationship, and not necessarily in the sense of supporting one another, but in connecting. It is a powerful dynamic when a client trusts enough to be willing to be 'seen' and is indeed 'seen' by the therapist and valued. Powerful enough to allow change, yes. Powerful enough to create magic? Perhaps that is what change is. We create magic when we change the patterns that hold us and limit us. We create magic when we allow ourselves to be the best versions of ourselves that we can be.

I wonder if it is these connections that give life meaning?

How can counselling help you? My experience is that counselling helps by offering you a different perspective on the thoughts that run through your mind. Often we all need a space in which to say out loud the thoughts we keep inside. I believe that in a safe, warm environment we can find the courag...