How to survive an affair

Infidelity is the ultimate betrayal, but it doesn’t have to lead to divorce.

With emotional and sexual betrayal wrapped up in lies, a partner’s affair is one of the hardest blows life can deal. Whether it was a drunken one-night stand or a long-term liaison, most people’s instant reaction is to split. But is it that simple? There was something wrong in the marriage, as it’s unlikely for one to stray if they’re blissfully happy; but you’ve both invested a lot in this relationship and there may be many reasons why it could and should be saved.

This could be a chance for both of you to address prolonged, dormant issues and to emerge all the stronger for it. There’s no one-size-fits-all solution and the first step is to understand what kind of affair it was:

Often long-standing partners get into a rut and forget to talk to each other about what makes them feel alive.

It’s common that the mid-life crisis affair usually results from a scenario where a man has done the “right” thing: he’s got a responsible job, been a good husband and a family man but then reaches mid-life and suddenly realises his needs aren’t being met and thinks, “where’s the payoff?” Often men in this position feel very split – one part still feels responsible yet another wants to go and have fun.

The resolution for him is to work on understanding himself and his needs, and source better strategies for meeting these needs in his existing relationship, instead of including a third party.

The exit affair takes place when someone wants to get out of his or her relationship but doesn’t have the maturity to talk it through with their partner.

They use the affair both as a way to protect themselves – they’re going to receive support from someone else – and as an excuse to leave.

They’ve decided it’s over for them, they don’t want to work on their relationship and the affair is a way of making a definite statement, “it’s over”. Often the affair isn’t about them wanting to be with their new partner, they just don’t feel strong enough to leave until something forces the issue.

People think that infidelity is about sex but it’s usually deeper than that. The conflict avoidance affair is a way of letting your partner know you’re unhappy but by acting it out instead of communicating directly. A typical example would be the guy who goes away for a weekend with friends and ends up in bed with someone else. It might seem that he just wants a bit of fun, but subconsciously it’s about something unbalanced in the relationship with his current partner, and he actually wants her to find out.

The conflict avoidance affair is an extreme way of communicating which appeals to people who’d rather sweep things under the carpet. Often conflict avoiders are mimicking behaviour learnt from their early family life – if their parents ignored important issues, then that’s how they’ve also learnt to deal with conflict. They struggle with how to kiss and make up, so they avoid a realistic conversation with each other.

The sex addict or serial adulterer is usually male. Men like this use physical affairs as a way of filling up the emptiness they feel inside. Unfortunately, whilst being a lothario may feel manly, and making conquests may massage their egos, their thrill-seeking is merely a quick fix which doesn’t solve the underlying problem. Often these individuals are quite trapped in their addiction and unwilling to change, so attempting to bring a serial adulterer to counselling can be difficult.

This affair happens when someone is growing closer to their partner but can’t risk going that step deeper. It applies especially to men who have a fear of losing their masculinity by making themselves vulnerable. Intimacy avoiders seek love elsewhere but as soon as their new lover starts saying, “what about us? I want more commitment from you,” the intimacy avoider takes flight. Male intimacy avoiders want to be ‘Jack the Lad’ but end up settling for quick flings because that feels safer than being close, and therefore vulnerable, in a committed relationship. 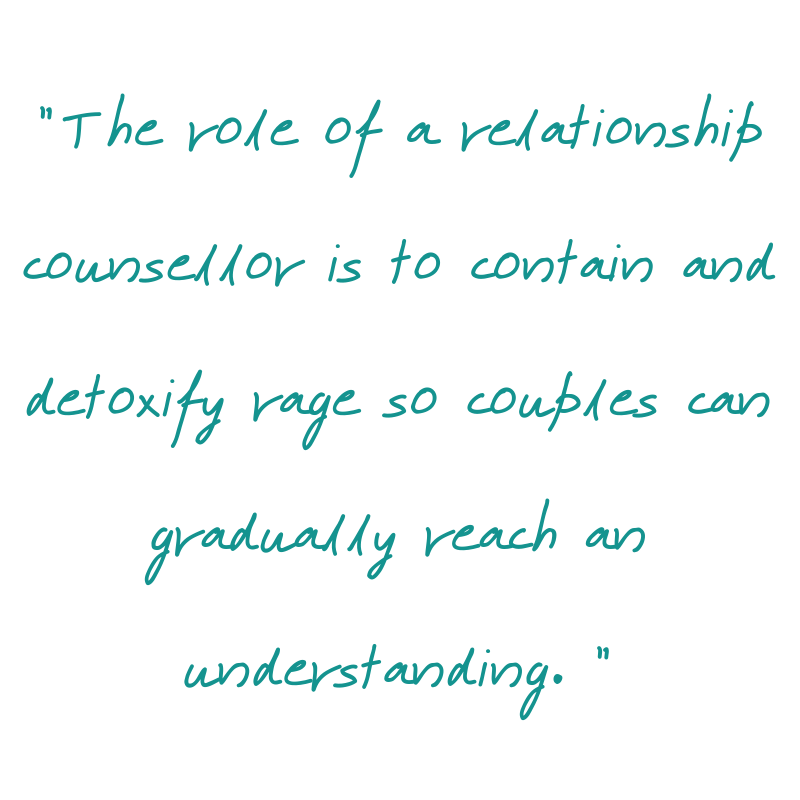 Don’t make any snap decisions. If you leave immediately, you will remain angry, possibly forever, and you’ll miss an opportunity to learn or repair your relationship.

When your partner has strayed, you’re entitled to understand the situation. You don’t need graphic details, but you may need the basic ones. Where did it happen? If the sex took place in your bed while you were at work you might feel differently than if it was in a hotel. Also you need to know whether protection and contraception was used.

Once trust has been destroyed, intimacy may feel impossible. It’s OK to sleep in separate rooms for a while, but try and avoid leaving to sleep at your mum’s for a lengthy amount of time, as it can just fuel your indignation and anger. Try to reach a functional agreement about staying in the same house and being civil to each other while you decide what to do about it. And avoid other people’s moral judgments and advice.

People instinctively try to manage their pain by being angry, and they go over and over the events because they’re not willing to deal with the issues. Professional help can encourage you to focus on the bigger picture. The role of a relationship counsellor is to contain and detoxify rage so couples can gradually reach an understanding.

5. Let go of the fantasy

If your partner has cheated on you then you may have had an unrealistic view of the relationship. While it’s tempting to hate your partner, it may help to explore what motivated their adultery. Equally, try to consider how you consciously or unconsciously contributed to the situation. While you’re not to blame, examine whether you’ve struggled to challenge your partner or allowed your relationship or sex life to become dull.

We’re all guilty of neglecting our relationships at some point. People expect them just to work, rather than realising that both parties have a responsibility to keep things alive and fresh, particularly in communication and dealing with crises as they occur. Relationships are hard work, but it’s through hard work that the greatest rewards come. After an affair, your relationship is facing its greatest challenge. If you can truly overcome this, it will be deeper and stronger as a result.

Even if you do decide to separate, there’s still a helpful or unhelpful way to leave. If you can, try and avoid leaving without saying a word. Explain to your partner the negative and the positives of your relationship and why you’re going, so you can leave with grace. Being truthful will help you identify your emotional and behavioural patterns, which can help to give future relationships a better chance of success.

Richard Cole is a Emotionally Focused Therapist based in Brighton/Hove.