Couples: Too Many Arguments in Your Relationship?

Couples: Too Many Arguments in Your Relationship? -Understand what arguing is about and get out of this habit

If you answered yes to any of these questions the following may be of help to you…………..

This is based on the Drama Triangle first described by Stephen Karpman in 1968. It is called the drama triangle because it is a common plot used in soap operas, films, etc. Very often wars, political issues and even some organisations are imbued with drama triangles.

They are ‘high energy’ psychological games where there are no winners. Such games are played by most people at some time or other and most probably learned in childhood.  It is important to recognise that they are played without conscious awareness, so one is not aware at the time that it is repeated behaviour. You can, if you so choose, not get into such behaviour – or decide when to get out of it.

There are 3 positions in the triangle: Victim, Persecutor and Rescuer. Those playing the game will switch from one position to another – sometimes with bewildering speed!

Everyone will have their favourite starting position in, which they do not necessarily stay for very long – before they switch to one of the other positions (see Figure 1 below): 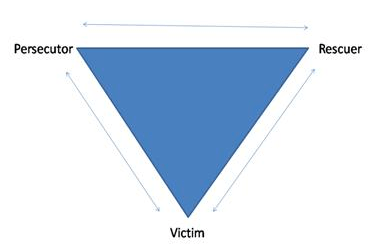 How to identify that you are in a drama triangle – and escape.

Note the repeated pattern. Note any physical ‘signals’ that you might have, and ask yourself what these are about. Make a conscious decision that you do not want to continue to play the game. Just by bringing the situation into your awareness and then not repeating an old pattern puts you are in a strong position to move out of the triangle – and end the game.

Roles in the Triangle

Victim: Those who favour the Victim position see themselves primarily as vulnerable, open to experience without pretence, with an inner availability to own their experience. So if you think you are in a game ask yourself if you are discounting your own ability to find a solution to the problem. Victims feel their own feelings.

Rescuer: Those who favour the Rescuer position see themselves as helpful, caring and get actively involved. So if you think you are in a game or will go into a game ask yourself if you are discounting the other person’s ability to think for themselves and use their own initiative. Rescuers need victims, as they find it difficult to feel their own feelings so need victims to feel through.

Persecutor: Those who favour the Persecutor position see themselves primarily as assertive, perceptive and discriminating. So if you think you are in a game, or will be drawn into a game, ask yourself if you are discounting the fact that others have dignity and rights. Persecutors need victims to act out in order to get in touch with their own feelings.

Sarah and Jack have been living together for three years, both have stressful jobs. Jack works from home as a freelancing graphic designer and Sarah works for a local insurance company. She is fed-up with her job, particularly her line manager, whom she believes to be incompetent. Sarah also believes that Jack isn’t doing enough house work especially as he is home all day.  Despite their continual arguing both state that they love the other, sex is usually good, and they are beginning to talk about getting married and or having a child.

Both agree that the arguments need to stop and each is trying to do something about it.

Example of an argument:

Sarah:  (Just arrived home late from work).  I’ve had a terrible day. Julie (her line manager) has been a real incompetent bitch today, you wouldn’t believe what she did. I don’t know how much more I can take. FROM VICTIM POSITION

Jack: I don’t see why you can’t go and see her boss and tell him what’s happening. FROM RESCUER POSITION

Sarah: Who do you think you are always telling me what to do? You know that’s a really stupid thing to say. You are so inconsiderate. FROM PERSECUTOR POSITION

Jack: I was only trying to help. FROM VICTIM POSITION

Sarah: It’s alright for you, home all day messing about on your pc. FROM VICTIM and PERSECUTOR POSITION

JACK:  (Shouting) Just open your eyes and look around this bloody flat, I have spent the last 4 hours cleaning the place, like you asked. Most of the mess was your bloody stuff. You never think of anyone else but yourself. FROM VICTIM and PERSECUTOR POSITION

This continues, on and on ……. until they both get physically and emotionally exhausted. Both now wonder why they ever decided to live together. Jack feels a knot in his stomach, Sarah has a headache.

And both of them are discounting.

Sarah is discounting that she has the ability to sort out her job situation as well as the ability to ask Jack for what she needs – which in this case was someone to just listen to her and not problem solve. Jack is discounting that he needs to explain to Sarah (not during an argument) the reality of working as a freelancer in a time of recession and how difficult he is finding it.

Both have discounted that they have stopped having fun, going out together and laughing together.

Some couples will be able to use the above example and analysis to address their own particular situation - as drama-triangle arguments in their relationship. However, if you need assistance with addressing relationship problems please come and see us. They are often easier to resolve than you may think.

Karen Hellings UKCP registered Psychotherapist is the lead therapist of Kent Counselling & Psychotherapy Service. Sometimes making the first move to enquire about counselling can be difficult and with so many different therapies and therapists to choose from. KCPS has a team of professional coun...