Anger: what it is and how to manage it

Counsellors are seeing an increasing number of people about anger and how to manage it. Anger is not necessarily a negative thing. It is usually a sign that something is wrong and needs to be addressed. Sometimes that thing is within you, not elsewhere, and sometimes it is about external events. Jesus was famously angry in the temple when he knocked over the money changers’ tables – a story, amongst other things, meant to show us that there is a time and place for anger.

The important thing is how you process and deal with your anger. Some clients bottle up anger and cannot express it, and others are angry but do not realise it until therapy releases it. It is not healthy to bottle up anger, to suppress it or to deny that you have it. The causes of anger can be very deep, sometimes stemming from childhood. People can often confuse recent triggers for anger with the root causes of it and counselling often acts very effectively to unpick this so it can be released.

Anger can produce the same effects in the body and mind as stress. Improperly processed or unhealthy anger can impact badly in different areas of your life – for instance, withdrawal, tiredness, sleep problems, lowered libido, poor levels of tolerance, agitation, inability to relax, unhappiness and addictions.

For many people, anger issues stem from childhood, and so counselling can be a very effective method of working through this. If a family is uninhibited about expressing anger, the children may learn that anger “makes things happen.” This may make them grow up thinking that anger is a useful tool for getting what they want; equally though, it is possible that this over-exposure to anger will make them afraid of anger so that they repress it within themselves.

Alternatively, if a family finds anger totally unacceptable, then the children in it will not learn how to process their own anger. If they do get angry, they will be forced to suppress it, but the anger will still come out as a negative energy in several forms – sulking, withdrawal, passive-aggressive behaviour, frustration. Serious levels of anger can cause deep and lasting problems as well as immediate misery for all in the firing line.

Anger is a secondary emotion. You alone are responsible for your anger

Anger is a secondary emotion, which is caused by and hides a deeper emotion. If your friend puts you down in public, you may get angry when what you are really feeling is hurt or betrayed. Anger is often caused by deep sadness and, most often of all, it’s caused by fear.

Anger is a terrible bully that has a way of muscling out all your other feelings. You get angry partly as a defence (maybe not even consciously) to blot out the other more painful emotions – the ones that you’re really feeling. Counselling is an excellent means of uncovering this deeper pain and processing it in a more healthy way than anger. It can highlight other, more constructive, ways of expressing the hurt.

You alone are responsible for your anger. No-one else is - and that includes the person who has frustrated or irritated you. They may well have done something mean or hurtful to you, but how you respond to that is your business, not theirs. If you have to get angry, consider which form of anger you are going to respond with. 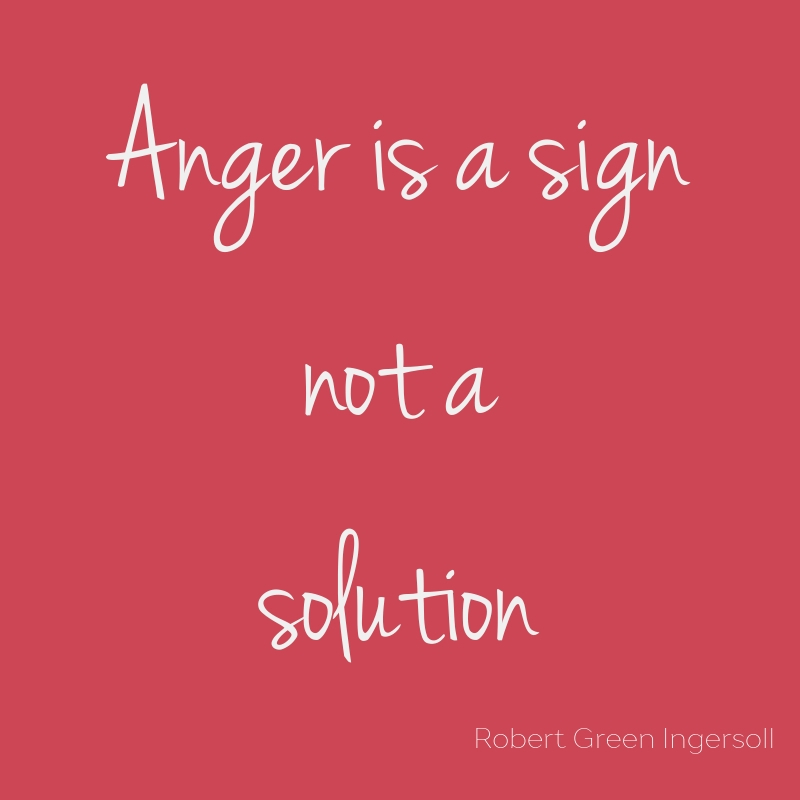 A good example of expressing anger from the above scenario would be to say to your friend, “I’m not happy. I feel angry about what you did in the pub and need you to hear that - but the main thing is, I feel hurt and slightly betrayed. I wouldn’t do that to you, so please don’t do it to me.” Hopefully, they will hear you and respond positively and apologise, if not you can take it further - hopefully not to an acting out of anger.

One way of thinking about your anger when you express it is to make sure that people you love and care about know that you have a problem with a certain behaviour and not them. If you let your anger about one issue spill out into a four-letter word general character assassination, then that is very likely to be much more damaging than whatever they did to annoy you in the first place.

In my experience, possibly the best way of dealing with anger is to become aware of it in the moment when you feel it – it’s a light-bulb moment: “Ah, I feel angry. Right, I usually do X. I’m not going to because that leads to bigger trouble. I’m going to do Y.” Even people in the habit of rage and red mist can still use this – it’s about practice. You won’t always get it right, but you can improve a lot.

If you manage to express rather than act anger, reward yourself with a pat on the back and notice the improvement. Others will begin to notice it too and express relief.

A counsellor can help you to look at the triggers of your anger so that you can seek to avoid them. I had a client who always got into a terrible mood when the man next door mowed his lawn during his Sunday breakfast. He learnt to avoid that trigger by using that time to walk to the shops for his newspaper.

Be aware that innocent people can be the target of your deflected anger simply because they are there at the wrong time when the real target isn’t. Perhaps work in counselling about releasing it at the right target. Counsellors can offer several exercises to release the anger and these are normally startlingly effective.

Any anger management will require you to look at the deeper reasons for it. Sometimes, these may be half-forgotten, avoided, denied or buried. Often anger can be a need for control - of others, events or yourself. It is also often an existential issue caused by lack of meaning, loss, isolation or lack of freedom. If we address the deeper issue in counselling, we can start to lower the amount of anger.

Ask yourself if you want to be right or happy? Even if your anger is justified, is the issue worth a falling out? It might be, but then again it probably isn’t.

Learn to “strike when the iron’s cold.” If your husband or wife said did something that you feel angry about, maybe take it up with them when everything’s cooled down. At this point, they are more likely to listen and give you an apology.

Resentment is a very corrosive, hidden and unpleasant form of anger. It’s a mixture of jealousy, frustration, bitterness and harboured injustice. It is a real joy killer. You simply cannot be happy if you have deep-seated resentments about someone close to you. It’s better to talk it over and see if you can reach a compromise. Ask yourself if the resentment you feel towards the other is about what you lack rather than what they have and address that honestly and positively in your own life – asking them to help with it as much as they can.

If you’re going to fight, fight fair. It’s not fair to hit your partner or friend in their sore or weak spots.I agree that it’s humanly very tempting to do this sometimes but don’t. It would be vicious and is likely to escalate things and causes deep problems between you later on.

In bad fights, don’t get the “big guns” out. By this I mean, for instance, don’t threaten divorce or to leave – unless it really has got to that point, of course, in which case you’ll know it long before this particular argument. Big guns are deeply destructive and once they’re out, they won’t go back in very easily. They undermine and they play on fear – and nothing stokes anger like fear. Agree this with your partner in a happy or calm moment. 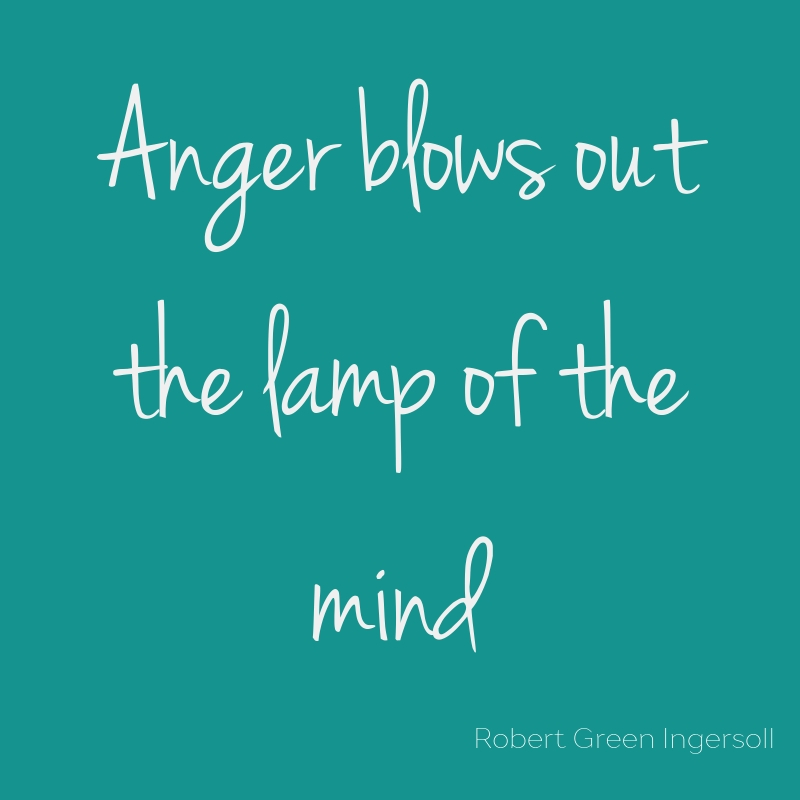 Try to laugh when the anger is over. Many moments of anger, when the short moment of heat has passed, reveal themselves to be funny. I’ve had couples who release their anger in a pillow fight – an excellent method which often also reveals the silliness of the situation.

Take time out. Going for a walk when you’re mad is not passive-aggressive or backing down. It’s common sense. You’ll calm down and come back more cool-headed.

If you’ve been angry with someone and they were hurt by it, don’t punish them a second time...realise that their hurt may be reasonable and that they have a right to be wary or reluctant. Sometimes forgiveness comes better and quicker if it gets a little space, so patience is often needed.

If someone has been patient for twenty incidents of your anger, it’s no surprise if they snap on the twenty-first. Realise that it is dishonest and deflecting to accuse them of being “the angry one,” at this point.

Since anger is energy, try to channel it positively - exercise, art, sports etc. If it has to be negatively expressed, think about doing this a safer way...shouting or swearing in an empty room, writing a letter you won’t send and may burn later.

Sometimes anger can be just another form of love. Often we get angry with those we love most. Recognise this. Anger can result in a very passionate encounter between lovers, which is a wonderful and exciting way of release.

A good way of working on your anger is to practise being the opposite - peaceful. Methods of feeling calm, or even serene, are a great antidote: meditation, breathing techniques, yoga, music, walking etc are all ways of staying more peaceful and therefore happier. Having a calm picture to look at, playing calming music or even having a statue of the Buddha in your garden can all work – although when you are actually feeling angry it’s better to do something more active like going for a brisk walk.