Trans topics are discussed in popular culture now more than ever, allowing for gender diversity to slowly become more normalised. On the other hand, toxic, misinformed, and abusive ideas about trans experiences are also rising in popularity. Although trans identities are currently the most accepted they have ever been in the western world, cisnormativity (the inherent assumption that one is cisgender unless told/proven otherwise), is still a prominent struggle in most trans people’s lives. 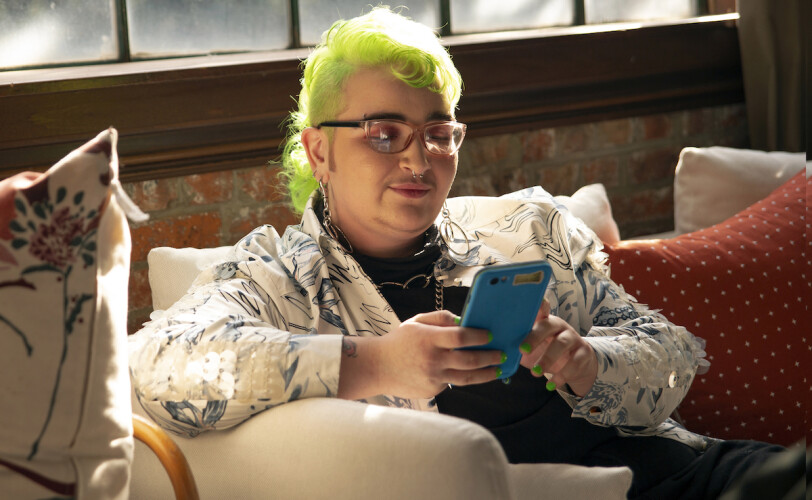 Many people would agree that transphobic comments, ideas, and behaviours create an unsafe environment for trans people to exist authentically and freely. Yet somehow, we fail to acknowledge how dangerous the messages deriving from cisnormativity can be too, perhaps, in some instances, damaging on a level deeper than overt transphobia could ever be.

It can often feel manageable to eventually brush off an absurd, transphobic online comment, or a problematic movie. Yet, what if the comment isn’t a one-off occurrence? What if it isn’t just one movie? Being faced with the notion of misgendering, gender-related stereotyping, cis-gender attitudes and expectations, the gender binary, can impact us not only in ways that are straightforward, but in profound, deep-rooted ways too.

What is internalised transphobia?

Binary and limiting ways of connecting with gender and its diversity are often subconsciously adopted by trans and genderqueer people, not due to their agreeableness with said attitudes, but because that is all that is familiar.

Transphobic internalisations are often expressed through one’s self-criticism and bullying of themselves, through society’s anti-trans lens. From negative self-talk about our bodies, to compensatory behaviours and withholding of authentic expression, internalised transphobia brings vicious cycles too familiar to many trans people. Emotional suppression and numbing are often all trans people are left with as a way of managing the chronic stress, the trauma of being trans in a cisnormative world.

What can I do about my internalised transphobia?

Regardless of your current journey, its direction and how far you have come so far in your inner-work, there are various things you can experiment with in order to tackle internalised transphobia and ‘rewrite’ these old, painful narratives.

Often, the more we tell ourselves not to think about something, not to entertain it, the bigger and stronger that thing grows. Noticing the specific thoughts as they enter our awareness, the way we feel in that moment, the way our body responds to the feelings and thoughts, instead of distracting ourselves, or avoiding being present, can be a starting point in breaking the cycle of internalised transphobia and its impact.

Searching for the roots of the pain

People often say that knowledge is power, yet sometimes being aware of our internalised transphobia can be tricky, especially so if we are constantly bombarded with its triggers. It can be like having a painful tooth and acknowledging the pain’s presence and the tooth itself, but then doing nothing about it. All we are left with is the pain and its awareness; that would be a daunting and probably unsustainable way of operating.

If yes was your answer to the questions asked earlier in this section, you are not alone and there are things you can do to help yourself. Specifically, it sounds like you may benefit from familiarising and educating yourself on trans issues, connecting with trans history and culture and keeping informed with the science and politics of gender identity.

Nurturing the part of you that keeps on judging you, minimising your identity and its validity is probably one of the last things you may feel inclined to do. Yet in most cases, curiously connecting with the part of ourselves that is harsh towards us, and asking them what they are hoping to achieve, what drives them, can lead to some of the most meaningful intra-relational interactions. For most of us, the part is coming from a scared, hurt, vulnerable place, desperate for the pain to be over. Ironically, behind the harshness and criticism commonly hides the innate drive to survive. With all their abilities, the part is doing their best to keep you safe, keep you going, push you for more and better. And though their ways aren’t fair, nor OK, and though you certainly don’t deserve the pain their judgement brings, they are doing all they know to help.

What if you connected with your curiosity about them? How they came to exist? What they had to do to survive? If anyone, ever, had their back? Now, imagine how extraordinary and revolutionary it could be if you were to nurture them. To empathise with them truly and deeply and show them the unconditional compassion and acceptance they never received. Internalised transphobia can, at times, be our desperate attempt at survival and nothing could be more healing than communicating to all our system that we are safe because we have ourselves.

Surround yourself with fellow trans people

Representation matters, seeing yourself in the people around you, whether in person or online, can help create a sense of belonging. It can help normalise our transness and challenge some of the notions of cisnormativity. Making an active effort to engage with content that involves trans people, such as through the consumption of series with gender diverse casts, or interacting with trans creators on social media, can be some small, yet meaningful changes. Searching for and connecting with your local trans community can be another way to challenge the biased ideas that stem from your internalised transphobia.

Struggling with internalised transphobia can leave us exhausted, hurt, and distressed. It may impact our confidence, our sense of self, our trust. Internalised transphobia may mean we don’t leave the house because our gender dysphoria is too triggered, we isolate ourselves, or resort to harmful coping-strategies to soothe the pain. However, you don’t have to struggle alone, this is a journey you don’t have to take on your own. Working alongside an affirmative therapist with experience and knowledge in the gender spectrum and diversity can make this ride a lot less bumpy. You deserve to get the support you need.

Philip Kalatzi is a therapist, specialising his work in trauma and Gender Identity difficulties. Philip is passionate about affirmative and compassionate therapy, where clients can feel seen and accepted unconditionally. You can enquire about working with Philip remotely, through his private practice.

How has lockdown impacted gay dating and sexual relationships?

When the government ordered a lockdown to attempt flattening the COVID-19 curve, a question soon arose: what might...