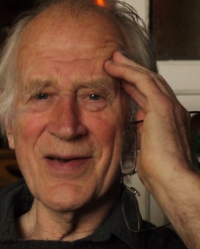 If you have skype installed you can select the link below to call George Blair MA, FIP, UKCP.

Call it 'a wild surmise... like some watcher of the skies when a new planet swims into his ken'. (John Keats)

I've been at it for twenty years now and find it a rich experience. In the same way as a doctor, teacher, artist, engineer... it takes time and practice to become a seasoned therapist. Many years ago and long before I started training I often didn't really know how to be or what to say. I just wanted to know more about what was wrong, because it seemed it was me that was wrong and everyone else knew exactly what was going on. Eventually that led to wanting to study psychology, and from there to exploring psychoanalysis which is what I eventually trained in. But even that was only a beginning. After you qualify there is the apprenticeship and that is the process of ceasing gradually to cling to what others say is the right way and move towards a sense of being seasoned.

Pychoanalytic work aims to foster a willingness to know about the things in us we don't feel comfortable about, what we don't much want to know, or may be unaware of. Those shadows hold back the blossoming of our true personality. They can, however, be enabled to come into the light through the unconscious exchanges between patient and therapist.

It’s very simple… but very deep. It is two people sitting together attempting to discover who they really are. And usually it is undertaken because of a sense of being in a kind of wilderness. It means seeing how it can become possible to lower our defences, not strengthen them. So it's not a case of getting rid of like what Hamlet wished for ('to take up arms against a sea of troubles and by opposing end them'. No, more a matter of discovering that what has been lost in the fog can be found and owned.

So it's daring to know what’s tangled up in secrecy and distrust. It's emerging from a buried privacy into the open, the unmistakable challenge of being ourselves.

I am qualified as an analytic psychotherapist and a full member of FiP (Forum of Independent Psychotherapists) which is an Organisation Member of the CPJA College of UKCP.

My original profession followed in the family tradition for which I trained at St Andrews University where I studied Philosophy and subsequently Theology at Edinburgh University leading to ordination in the Church of Scotland. During that time I was becoming increasingly interested in psychotherapeutic issues and was invited to become a tutor in the Clinical Theology Association.

My initial training was Humanistic, following three years in analysis with a Jungian analyst, at the Chiron Centre in London from which I gained a Diploma as an integrative therapist in the UKCP in 1996. By during that time I was recognising the direction of my interest to be psychoanalytic. I affiliated myself with the Squiggle Foundation based on the work of Winnicott and which guided my studies and supervised my work and in 1997 I began ten years of analytical psychotherapy with a psychoanalyst. I was accredited a Psychoanalytical practitioner by the Forum of Independent Psychotherapists in 2008.

At present I work four days a week and see patents once a week or twice weekly.

My fees are between £50 to £60 and may, depending on circumstances, be negotiable.

People sometimes ask, "What kind of people do you see?" The best answer I have arrived at so far is: "People like you and me."

I am particularly interested in creativity and the meaning of depression, boredom and apathy and sexual issues.

My main focus is to understand at depth what is the nature of the unconscious communications that occur between the two parties to a therapy relationship.

I have been in a monthly Tavistock group over a period of four years up until 2013 where much emphasis is laid on the relationship between difficult childhood and ingrained destructive attitudes and behaviour in the adult.

I am interested to explore the limits of what an analytical approach can achieve in terms of the integration of the self which is basically the analytic quest.

I am fairly passionate about literature both as art and as the exploration of the human condition.

I am intrigued by the influence of the culture of the family, positively and negatively.

I haven't ever done Infant Observation as a part of my training but I have four grandchildren!

I have a strong sense of the vital importance of dreams.

I have much more faith in not knowing than I do in any form of fundamentalism.

I do not believe in the medical model in my work; both parties are in search of themselves.

The place of mystical experiences is a subject that greatly interests me.

I have at present spaces in the morning and afternoon, most week days and evenings after 8pm on Tuesdays and Wednesdays. evening..

Before using our site, please take a moment to review our Privacy Notice and Cookies policy. By continuing to use this site we'll assume you agree to both.
Ok