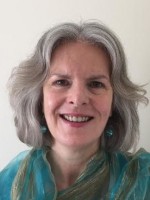 I am a qualified Counsellor and Psychotherapist (UKCP registered) with over 30 years experience working with both individuals and couples.  My role is to work empathically with you to encourage greater personal awareness and insight, in order that you can make the life changes that you long for.  I work with genuine respect for you and your personal values, whilst offering alternative ways of understanding yourself and your life.  The process offers you a therapeutic alliance which facilitates personal and spiritual growth.  It also encourages the development of the necessary inner resources and personal qualities which will support  you to develop the freedom to live more fully.

I have been working in the field of people development, particularly Human Resource Management, since 1979 and have been practising in counselling and psychotherapy since 1991; and since 1995, I have been running my own private practices in London, Witney and the Cotswolds. I currently only work in Witney.

I practise with professional supervision and adhere to the UKCP Code of Ethics.  My trainings include:

I also teach and support people in their meditation practices and I offer Mindfulness practices.

Mindfulness skills drop in group based in Witney

Counselling and Psychotherapy Sessions:
£60-£70 (by negotiation) for individual sessions
£80 for couples sessions

Supervision Sessions:
£60-£70 (by negotiation) for private supervisees
£70 - £80 for organisations

Mindfulness meditation: I run groups, workshops and retreats.  Please enquire about events and fees or go to my website.

I am no longer seeing people in-person in West Oxfordshire.  I am working online via Zoom/telephone

I am happy to offer sessions via Zoom, FaceTime or phone

How to manage anger and rage within your relationship

Anger is one of the most difficult - and often frightening - emotions to manage in a relationship. At one end of...

I am happy to offer sessions by Zoom, FaceTime or on the phone.

I am a qualified Supervisor having gained my Supervision Diploma at the Centre for Counselling and Psychotherapy Education in London in 2001.